The group "let's put the French Communist Party back on the track of class struggle” gathers communists in sections, councils, societies throughout , on the ground of the nationwide manifesto they supported at the 33rd PCF (French Communist Party) Congress. The manifesto especially rejects, for the  2007 presidential election, another political alternative of the "pluralistic left" type in alliance with the European Constitution supporters ; and therefore the manifesto advocates sustaining, through class-struggle, the revolutionary character of the French Communist Party. Our goal is to revive communist point of view and communist action within companies, neighbourhoods, cities and rural areas. We give a priority to social activism and breaking with the policies that have been implemented for 20 years to support the interests of globalized Big Business.

We reject practises such as co-management, marketing-politics, the illusion of only adjusting capitalism, as well as the dictatorship of EU institutions for this purpose. For these reasons, our current priorities are : defending and developing public utilities (and necessarily nationalized companies) ; and resisting to privatization (now that Gaz de France is about to be sold off).

Programme : For the three days

- Political activites : permanent dibate/ meeting point with communist comrades of our sections and councils / leaflets /brochures/ campaign against privatisation of “Gaz De and merchandisation of gaz and energy/ adhésion

Agenda of the stand:

Thursday 14 : Opening of the stand of RATP-Bus group, apéritif and barbecue.  Friday 15 :

-          18H30 : apéritif with those who signed the text of the Congress « Let’s put the French Communist Party back on the tracks of class struggle » (sympathisers welcomed). Political speech.-          20h30 : brotherly dinner of the comunists of the 15ème district and their friends  (Chili con Carne of Josette)

Introduction by Stéphane AURIOL, member of the PCF National Council, secretary of the group RATP Bus. With militants of unions/comunists of EDF-GDF, la Poste , la SNCF …

- 11h00 : INTERNATIONAL DEBATE  « Resistance against imperialism and capitalism. How working together ? Communism in the 21th century and new international. » Details.

- From 16h00: "Venezuelian afternoon" cultural, political exchange with a delegation from Venezuela 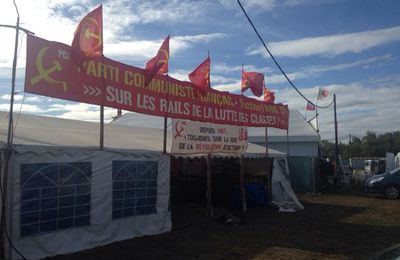